Plank is a seafood focused restaurant in the Old Market in Omaha, Nebraska. With a great stroke of luck, we actually got to go out on a date night with another couple, and we decided to head downtown to the Old Market for a change of pace.  Our friends were interested in trying something new, so we agreed on Plank Seafood which was new to all of us. Plank is one of the newest members of the Flagship Restaurant group, owners of Blue Sushi, Roja, and Blatt Beer and Table.

Where is Plank Seafood Located?

Located in the heart of the Old Market, Plank fills a need for a seafood focused restaurant in the Old Market, making this a popular and very busy place. We had made reservations, but with the restaurant very full when we arrived, we had to wait for about 10 minutes to be seated.

Once we were seated, we were able to get a better idea of the really cool interior. Exposed concrete beams, stainless steel and glass fixtures and exposed bricks are warmed by dark wood booths and beams. Bright orange covered booths framed with the dark wood line the walls creating inviting intimate areas.

A wooden sculpture similar to a wooden boat frame hangs from the high ceilings creating an interesting focal point and reinforcing the feeling of a modern wharf.  Separated into two main areas, the oyster bar and bar area and the main dining area. The room feels open and lively when they were as busy as that Saturday night. Additional nods to the nautical theme decorated the walls, a neon fish “jumping” sign, while oars, fishing gear and buoys were scattered about the walls.

The oyster bar serves as the focal point when you enter the space, with fresh oysters sitting in ice filled glass cases ready to be shucked and served.  A large stainless steel facade above the bar serves as a space for the menu boards showing the catch of the day while also hiding the liquor storage for the bar.  The bar area was spacious and inviting and fans of fresh oysters would find Plank quite comfortable. What Drinks Did We Order?

With us comfortably seated in our booth, we ordered drinks, with three of us ordering from the cocktail menu while our friend “K” ordered a white wine. The cocktail menu reflected the maritime theme as the cocktails were all named after various nautical terms  Mrs Nom selected the Elderflower Eye Splice, a sweet floral cocktail featuring American Harvest organic vodka, St-Germain elderflower liqueur, and Luccio Moscato d’Asti.

A rosemary sprig garnish perfumed the drink with a fresh evergreen hint that brought out the floral notes of the St-Germain. Mr. Nom started with the Capsize Cucumber Collins, with Hendrick’s gin, basil simple syrup, lemon, raspberries and cucumber slices with club soda. A nice classic flavor combination, the sweetness of the muddled raspberries tempered the herbal basil and gin and cast a pink hued gradient through the drink giving the Capsize a nice appearance.

The muddled raspberry segments however tended to clog the thin straw used in the drink, which made drinking it somewhat difficult. Our friend “C” stuck with a familiar classic, the Old Fashioned Sailor.  Made with Templeton Rye and Angostura bitters, the cocktail had a nice spicy boozy bite.  The first round was a good solid drink, but consistency seemed to waver a bit when he ordered the second drink as it tasted nothing like the first. The second drink was better after a brisk stir, but it still lacked the balance in flavors of the first round. What Food Did We Order?

Our pair of appetizers, the Poutine and the Potato Crusted Calamari, arrived shortly after our drinks. The Poutine was a small plate of fries with Wisconsin white cheddar cheese curds and bacon gravy drizzled on top. The thin cut fries were crisp and well seasoned, the bacon gravy and cheese curds melting into a gooey smokey smear that was deliciously creamy with a hint of sour tang from the curds. All of us really liked this dish and we found ourselves sopping up the remaining gravy with some of the calamari pieces. The breading on both the calamari and zucchini was crunchy and buttery but not overly thick, allowing the interior flavors to shine. Two sauces, a garlic citrus aioli and a smoked tomato basil cocktail sauce were good dipping accompaniments (but the bacon gravy from the poutine was better!) What Oysters Did We Get?

Mr. Nom decided to try a small selection from the oyster bar, choosing a 38 Degrees North and an Island Creek oyster.  The 38 Degrees North, a Chesapeake Bay species that has a mild slightly sweet and milky flavor that carried a nice salty hint of the sea.  The Island Creek oyster came from Duxbury Bay off of the coast of Massachusetts was a smaller oyster that had a much more bold flavor, slightly mossy with a strong salinity that created a rich complex flavor.

The oysters are served on a small metal platter filled with ice with a slice of lemon and three dipping sauces (which Mr. Nom found to be unnecessary as the oysters were quite good with just a hint of lemon.)

Our remaining orders arrived after a slight pause which could have been due to a large table that delayed the kitchen slightly. The delay wasn’t a big deal as it allowed us to enjoy some great adult conversation and use that as an opportunity to nibble on the remaining bits of the poutine and for the guys to order another round of drinks.

The ladies had opted for some lighter fare, with “K” choosing the Fish tacos and Mrs. Nom the Lobster Wedge Salad. The guys went for items from the wood grill with “C” ordering the Albacore Tuna Au Poivre and Mr. Nom the Cedar Plank Scottish Salmon. K enjoyed the fish tacos, choosing the blackened version of the dish.  The soft flour tortillas came stuffed with white fish, a crunchy fresh slaw and pineapple pico de gallo. A charred jalapeño crema gave a creamy spicy burn that was cooled by slices of smooth avocado.  K said the spice was not overly hot, flavorful and controlled rather than just a raw heat.  A large pile of natural cut fries was sprinkled with a chilli lime seasoning that K raved about. Mrs. Nom rarely passes up a wedge salad, so when given a chance to add Lobster to a wedge salad, her order was almost a foregone conclusion.  Crisp iceberg lettuce came topped with lobster chunks mixed with a bit of mayo similar to the stuffing of a lobster roll.  Grape tomatoes, chunks of avocado and red and green onions were sprinkled over the top of the lobster bringing a mix of tangy and creamy that made a rich salad.

Chunks of applewood smoked bacon paired smoky salty with the tang of a creamy blue cheese dressing and blue cheese crumbles that layered on more big flavors.  Mrs. Nom enjoyed the salad and would order it again. The Albacore Tuna Au Poivre came medium rare and sliced on the bias, atop a bed of herb roasted fingerling potatoes and roasted Cipollini mushrooms.  A green peppercorn brandy cream sauce topped the dish with a rich creaminess that complimented the hint of smoke from the wood fired grill used to cook the tuna. C said he liked the dish and said the tuna was really well cooked. Mr. Nom had the Cedar Plank Scottish Salmon, a wood fire grilled fillet of salmon that came with herb roasted fingerling potatoes and sautéed baby green beans on a warmed cedar plank.  The cedar smoke gave a nice fragrant smokiness that infused the potatoes and the salmon and complimented the fennel orange butter sauce.

The green beans were well cooked, firm with a nice snap.  The salmon was cooked to a medium on the inside, moist and firm, while the outside had a slight char from the wood fire that gave a nice crust. A drizzle of parsley oil on the plate was a bright splash of color and a herbal richness that picked up the cedar smoke. Mr. Nom’s second drink, the Moonlight Manhattan was a nice combination with the salmon, as the Jacob’s Ghost white whiskey and sweet Cocchi Americano and lemon bitters brought enough of a citrus tang to enhance the flavors of the fish. If you are looking for more places to eat in Omaha, make sure to check out Dante and Over Easy!

If you are coming to Omaha, we recommend renting a VRBO Rental or Airbnb Location to stay at! 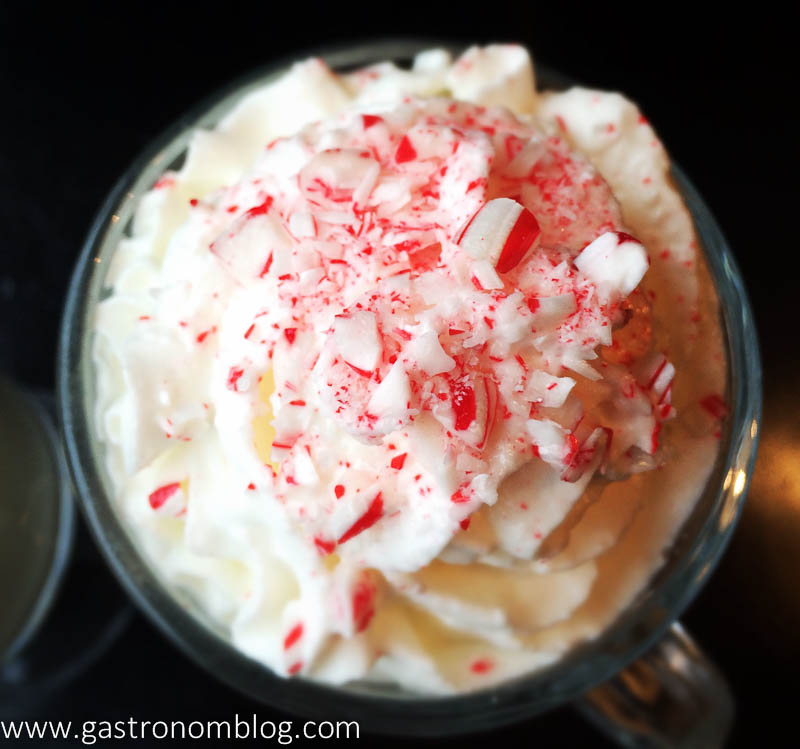 The food looks great. I have been meaning to eat there for so long now.

It was really good. Plank had been on our list of places to try for a while and I am sad that we didn't get down there sooner!