In the heyday of rail travel, one of the ways that railroads competed for customers was to offer the best in customer comforts and that meant that the dining car cuisine soon rivaled the meals found in fine dining restaurants around the country. With the rails crossing many different regions, the offerings on the dining cars had to be varied to satisfy all the different regional tastes.

This varied cuisine became to be known as Americana. It was in that spirit Railcar Modern American Kitchen was born, specializing in the fine cuisine of America with a focus on using local ingredients and house made specialties. 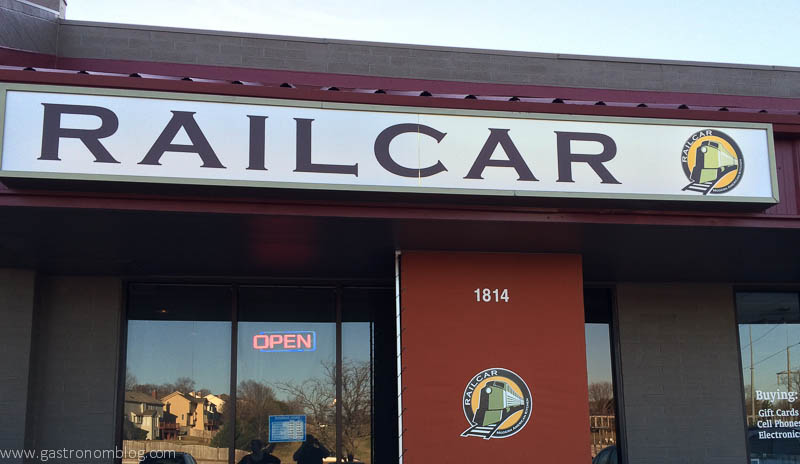 Where is Railcar Restaurant?

We decided to try out Railcar Modern American Kitchen early on a weeknight evening. The restaurant is in a strip mall, but Railcar has done a great job making the space feel reminiscent of an older building, with lots of wood on the walls, antique railroad posters and furnishings, and interesting barn doors that separated the party room from the main dining room were all a great touch.

Tables are made out of recycled sections of gym floor, which makes for a really cool looking table. Lighting is a bit dim and candles in vintage glass lantern holders make each table feel intimate. 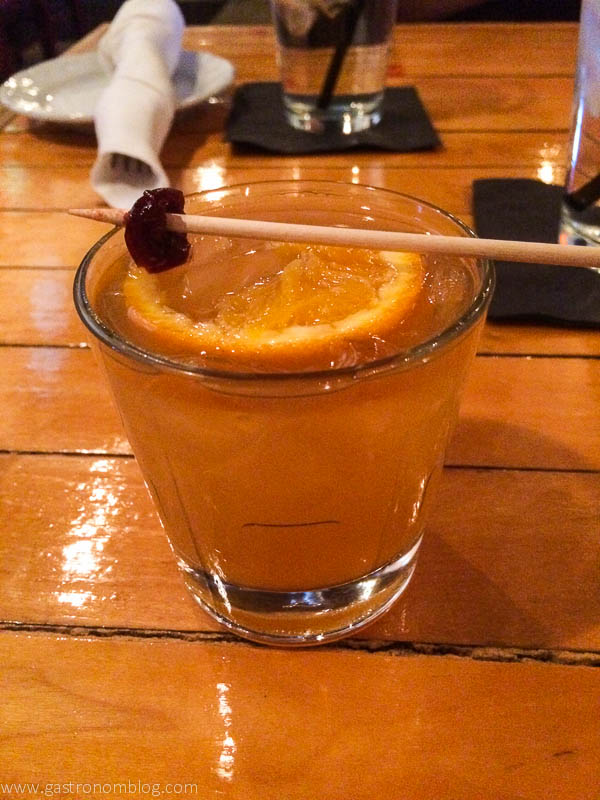 What Drinks did we Order at Railcar?

We started by ordering drinks, Mr Nom got a Old Fashioned, and Mrs Nom uncharacteristically opted for water! Railcar offers a number of beers, the majority of them from craft breweries, wines and a selection of house specialty cocktails.  The Old Fashioned was a solid cocktail, strong flavors of rye with a hint of citrus from the muddled orange, while a brandied cherry tops the drink. 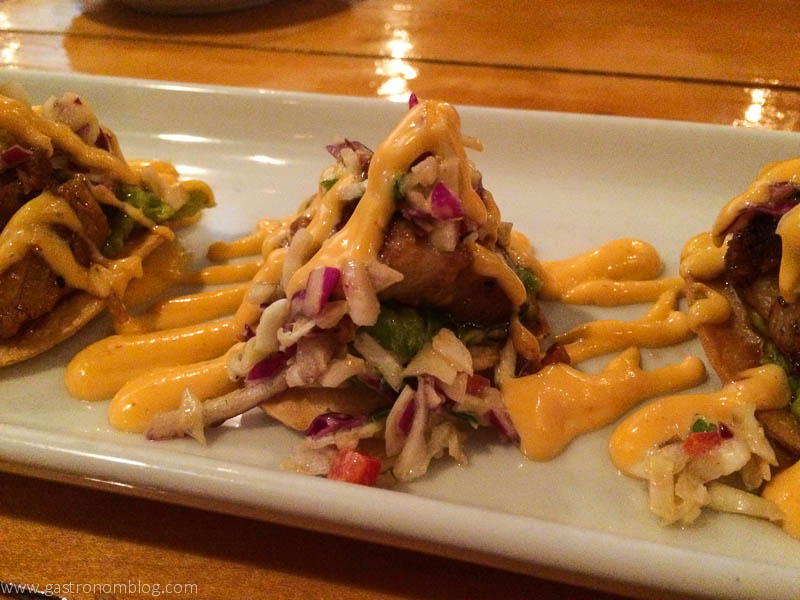 We started out with the Pork Belly Tostadas to share. Tender pork belly is served on a crispy tortilla chip, topped with fresh avocado, green cabbage and peanut slaw and a sweet chili teriyaki sriracha aioli drizzled over all of it. The pork belly was soft and rich, slightly salty which went really nice with the sweet and spicy saucy and tangy slaw. The aioli was just the right mix of heat and sweet with a nice creaminess that dressed each tostada. 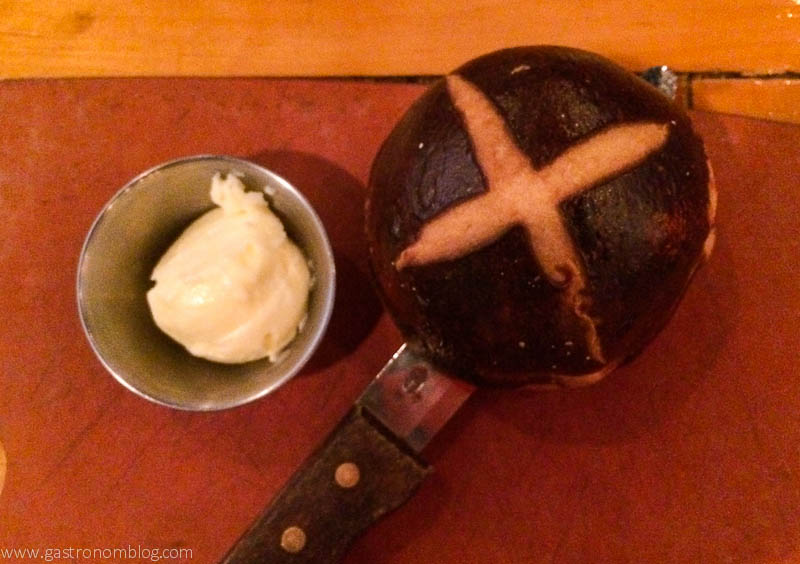 What food did we Order at Railcar?

We then ordered our entrees, the Wood Planked Truebridge Farms pork chop, and the Napa Chopped salad. We did wait a little while between our appetizer and entrees, but most of that time was spent sampling some pretzel bread with butter.

The bread was light and airy but with just the right amount of chewiness that it reminded you that it was a pretzel bun.  The outside had a nice crusty finish that had a toasty caramelized sweetness that was sprinkled with a bit of sea salt. 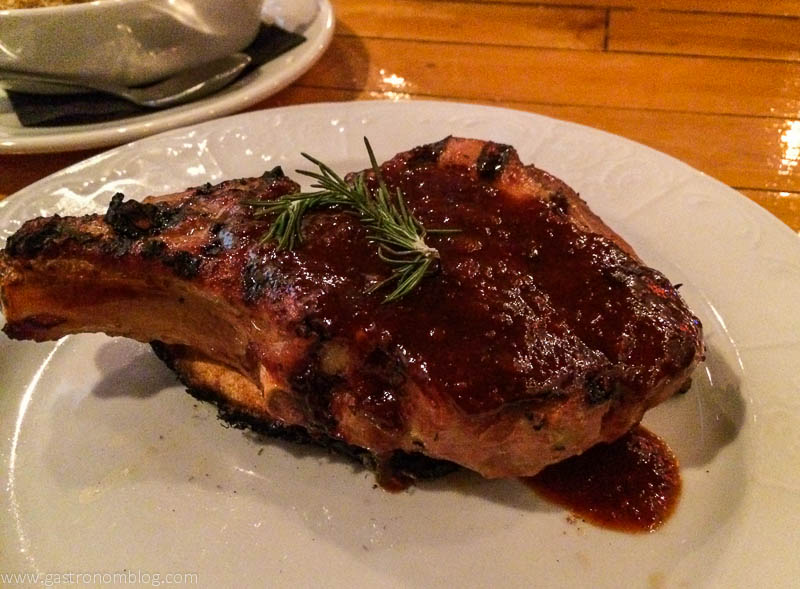 The Pork chop comes served atop a large oak plank with a maple bourbon glaze and creole bbq sauce. The wood plank was a great presentation and the aroma of the hot wood plank gave a bit of oak flavor that complimented the grilled and smoked chop.

The bourbon glaze and creole bbq sauce gave a nice smokey sweet layer to each bite of the nicely cooked chop. A cup of creamy Asiago mac and cheese topped with toasted seasoned bread crumbs accompanied this dish. The Mac and cheese flavors rich and reminiscent of homemade. 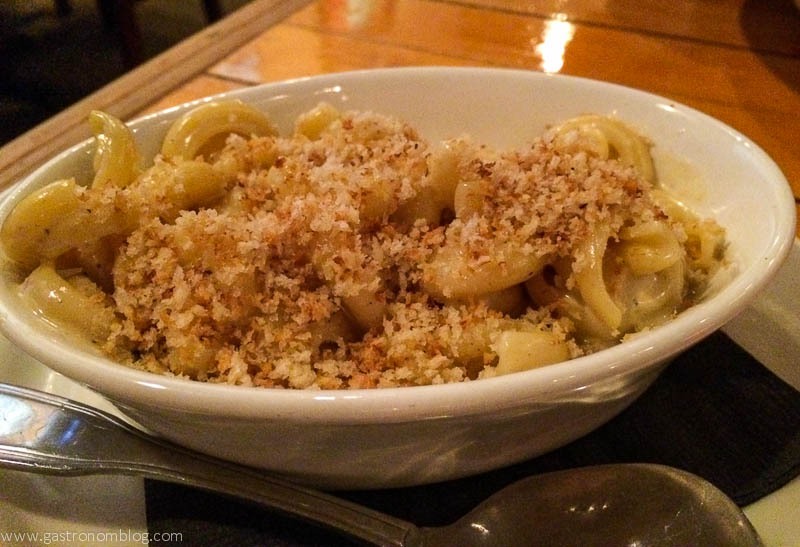 The Napa Chopped salad is a tall mound of organic greens topped with figs, toasted almonds, goat cheese, tomatoes, cucumbers, apples and roasted chicken tossed with a honey vinaigrette. The chilled chicken is a great touch and really makes the salad a standout as the small attention to detail makes the salad a cool refreshing dish which wouldn’t have worked if the chicken was warm.

The figs added to the sweetness of the honey vinaigrette, but Chef Jared Clarke manages to keep the salad balanced and not overly sweet with the cool freshness of the tomatoes and cucumbers.  Tangy crumbles of soft goat cheese added a nice splash of sour tartness that contrasted the sweetness of the dressing. 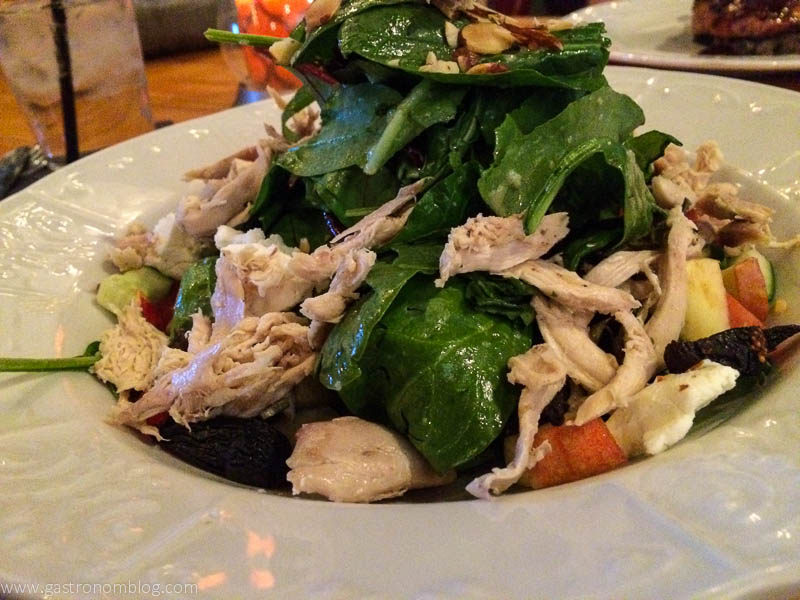 What did we order for Dessert?

We finished the meal with Railcar’s Strawberry Shortcake, which was a chef’s special that evening. The “shortcake” was a round pastry, sort of like a flaky croissant or puff pastry. Unlike the typical angel food cake that often serves as the base of a shortcake, this pasty had a nice balance of savory and sweet. It really helped make the strawberries into the star of the dish.

Perched atop a base of real whipped cream the cake came topped with sweet strawberries and a balsamic reduction sauce.  The dessert was a nice finish to the meal and not overly sweet which was a nice touch as sometimes desserts can stray into the overly sweet category very easily. 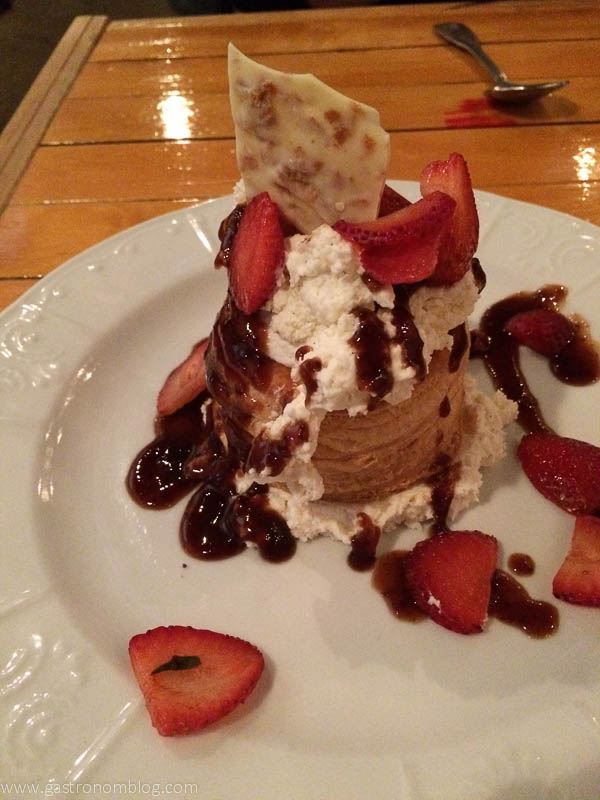 Railcar Modern American Kitchen is a great locally owned spot in West Omaha, which is a nice change as West O sometimes seems to be dominated by chain restaurants. The atmosphere and good food makes it a spot we would recommend heading out to if you want a taste of locally crafted Americana cuisine!

Other Omaha Restaurants We Recommend

If you are coming to Omaha, we recommend renting a VRBO Rental  or Airbnb Location to stay at! 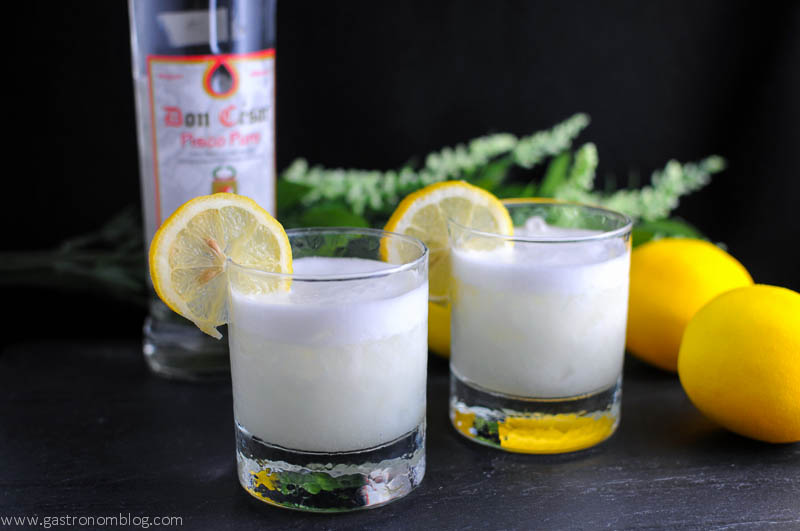 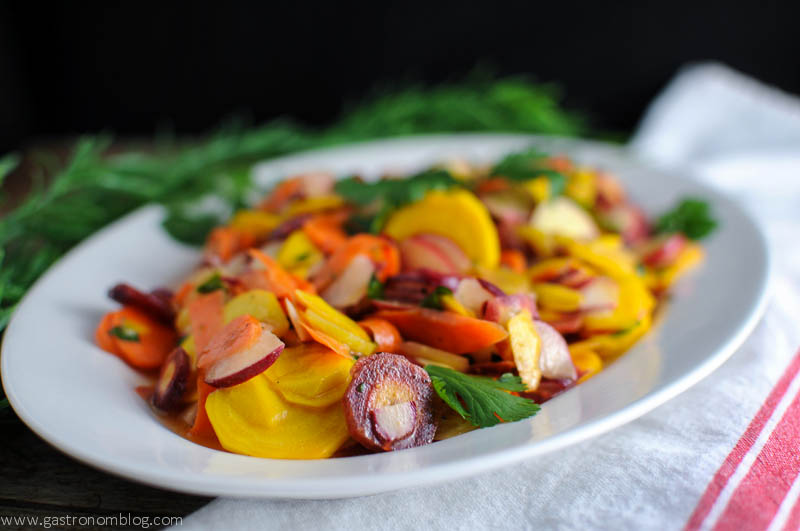 That's awesome, Kathy! We really enjoyed it, too!

Looks great. Have to see if they have anything like this here in North Carolina. Great find!

It was pretty tasty! As was the whole meal! Thanks for commenting!