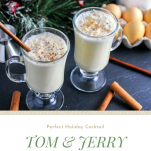 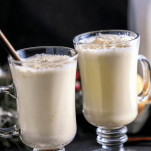 This is a family tradition cocktail, the Tom and Jerry drink is one that we have every year! This Tom and Jerry Recipe is the perfect holiday boozy treat that works all season long!

Every year after the turkey and sides have been eaten, and about the time everyone starts to get hungry for pie, someone will break out the mixer and the hot water and make up a big batch of hot cocktails called the Tom and Jerry. For us, making the Tom and Jerry recipe is officially the start of the Christmas season! Likewise, our tradition is to start decorating for Christmas the day after Thanksgiving, and these Tom and Jerry’s keep flowing at family events until after the New Year.

We think vintage cocktail is about to make a big comeback, or at least it should, it’s delicious! 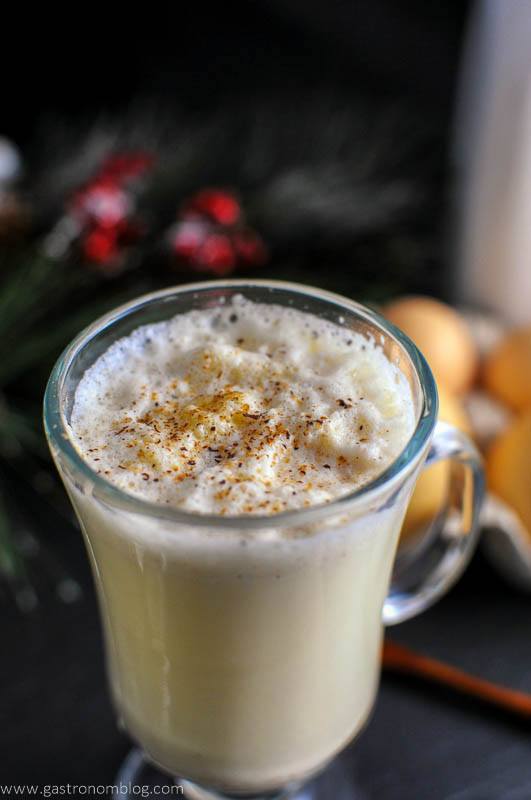 Why is it Called a Tom and Jerry Drink?

Claimed to be originally created back in the 1840’s as a winter cocktail at St. Louis’s Planter House Hotel by Jerry Thomas. Thomas authored the first cocktail book Bar-Tender’s Guide, How to Mix Drinks back in 1862 and he was considered the godfather of American mixology. In many accounts, Jerry Thomas claims its start as 1847, naming it after himself and “two small white mice” he kept as pets named Tom and Jerry.

But, it seems this egg based brandy cocktail recipe has been written down in America since the 1820s. It is sometimes credited to English author Pierce Egan, who write a play of the name of “Tom & Jerry” in 1821. but no recipe records of the same.

So, we can assume it is a descendant of Eggnog, and it was created sometime in the early 19th century, most likely in New England.

It can be a pain in the butt to make, but we think well worth it. Tom and Jerry dedicated bowls (and glasses) were filled with batter each holiday season around the US until the popularity seemed to die down around the turn of the 20th century. The recipe has been reworked by bartenders, as well as us. We have lightened the classic recipe that used to be served in Jay’s family, to make it not as heavy. But, it’s still rich and decadent.

The Tom and Jerry recipe is a warm sweet cocktail that can be spiked with brandy and/or rum, and topped with an aromatic burst of nutmeg. It was likely inspired by a boozy version of English eggnog that is served around the Holidays. This warm drink full of spices is perfect sipping on a cold winter’s night. The Tom and Jerry quickly gained favor at saloons and bars with drinkers who wanted a warming tipple. 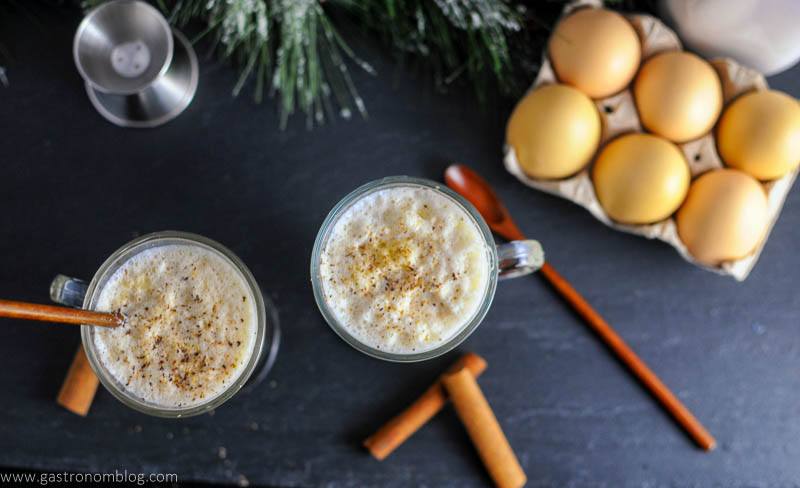 In our family, the Tom & Jerry was one of Mr. Nom’s grandparents favorite holiday drinks (they even had the little white china mugs that said Tom and Jerry on them)! The Grandparents were always the ones who made the batter, and family gatherings at their house meant that at some point Tom and Jerry’s would be served for all (virgin drinks for the kids of course!).

Butter and vanilla can be modern additions, but the base remains the same: frothy and spiced egg batter mixed into rum and brandy, and mixed with warm milk and nutmeg.

How do you Make the Tom and Jerry Mix from Scratch?

When we started hosting family gatherings, we decided that we needed to keep up this tradition and serve mugs of Tom and Jerry to our family.

We think the Tom & Jerry is a classic winter cocktail that every cocktail lover should try at some point. It is labor intensive, and isn’t the easiest drink to make, but it is worth doing. It’s a pretty old-fashioned drink, but it’s still a popular tipple around the holidays, particularly in the Midwest.

We could have used the recipe that the grandparents used. But, as is our typical path when looking at drinks for the blog, we do a little research in finding the right recipe. While we have always enjoyed the Tom and Jerry’s served at family gatherings, one commonly heard complaint was that the drink was way too sweet.

We were looking in our copy of the Bar-Tender’s Guide and the original recipe sounded delicious. Likewise, it was definitely not nearly as sweet. Since we are big on trying out the classic cocktails, we decided to serve our version of the original recipe this year. We did a taste test at our Thanksgiving gathering versus the sweet recipe that had been served for many years.

How to Make a Tom and Jerry

First, making the batter, and after you stir in the warm milk you will be rewarded with a creamy and dreamy drink that is perfect with a sprinkle of nutmeg on top. The taste can be somewhat like eggnog but with even more spices. 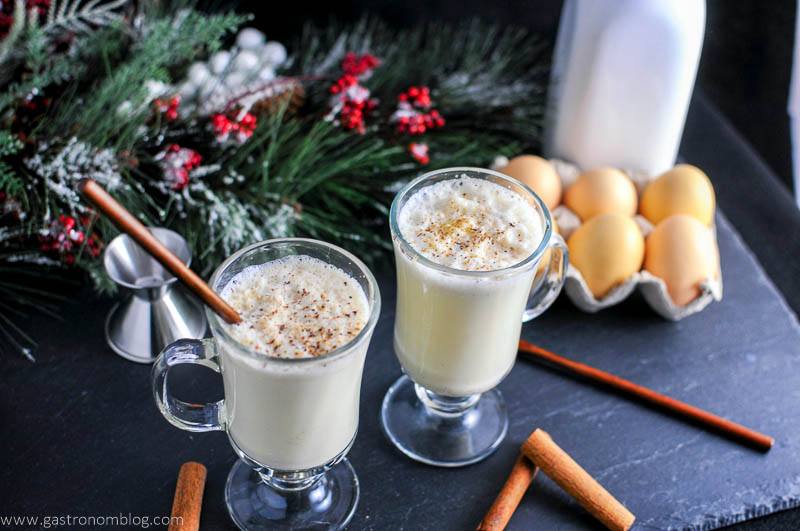 The original recipe does call for a in depth process to make the batter. The batter includes separating the eggs and beating the whites into a foam like meringue while also warming milk on the stove. You won’t regret the work when you are sipping your hot mug of boozy foam.

Make sure to stir constantly while adding the hot milk or the batter will curdle.

What is the Difference Between Eggnog and a Tom & Jerry?

While this drink is often compared to eggnog, it is different. The main difference is that a Tom & Jerry is served warm, and the drink is built in the serving mug. Eggnog, on the other hand, is cold and already mixed and ready to drink. Eggnog is also not necessarily an alcoholic beverage.

Today most store bought eggnog is made with cooked eggs and heavy cream. The resulting liquid is a thick custard. It’s a heavy drink, and a Tom and Jerry with warm milk is lighter with a similar flavor. 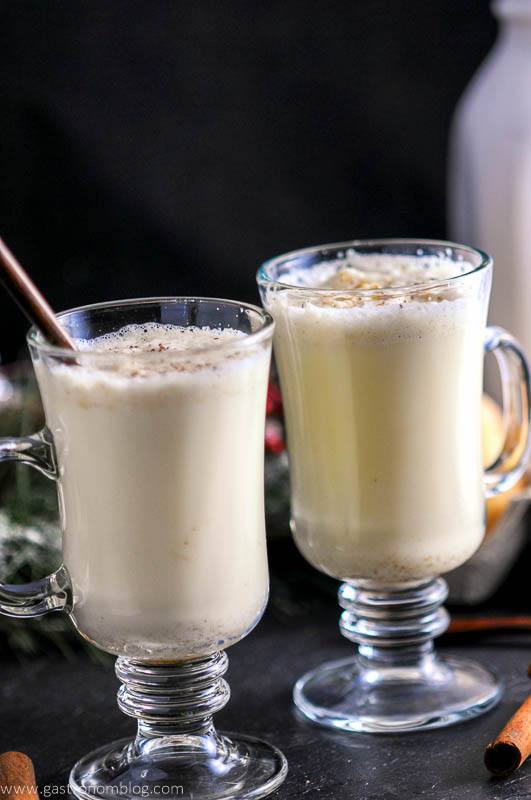 However, the Tom & Jerry is a fantastic alternative to eggnog, and many drinkers prefer it because it is more of a warm milk punch and has less of an egg flavor. It can be made virgin just with the batter and warm milk if wanted.

We think this style of Tom and Jerry is a more latte or cappuccino than heavy eggnog. The top has a nice foam like a coffee.

You may find that putting together the Tom & Jerry is kind of like making a hot buttered rum. It begins with mixing the batter, which can be refrigerated or frozen until it’s time to make a drink. The  batter makes for about 25 drinks. It’s a great way to have a tasty hot cocktail ready for the holidays. 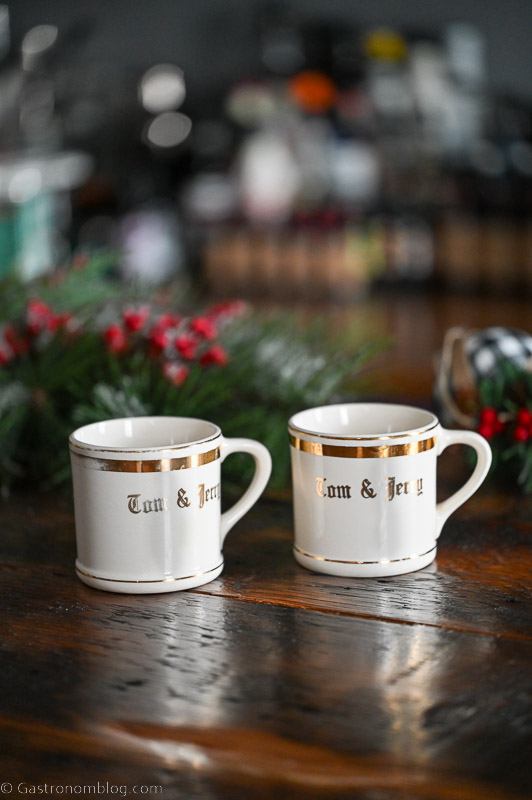 Also, we should mention the elephant in the room. Yes, this drink contains raw eggs. If you feel you can’t do raw eggs, you can buy pasteurized in the shell eggs.

Make a big batch of the Tom & Jerry cocktail recipe batter, and it’s perfect for a party!

Best Brandy for a Tom & Jerry

For this Tom & Jerry cocktail, we think there are some great brandy options. There are many different kinds of brandy: flavored brandies like apple or pear, VS/VSOP brandies, cognac or Armagnac. All good choices and just use what you would like. 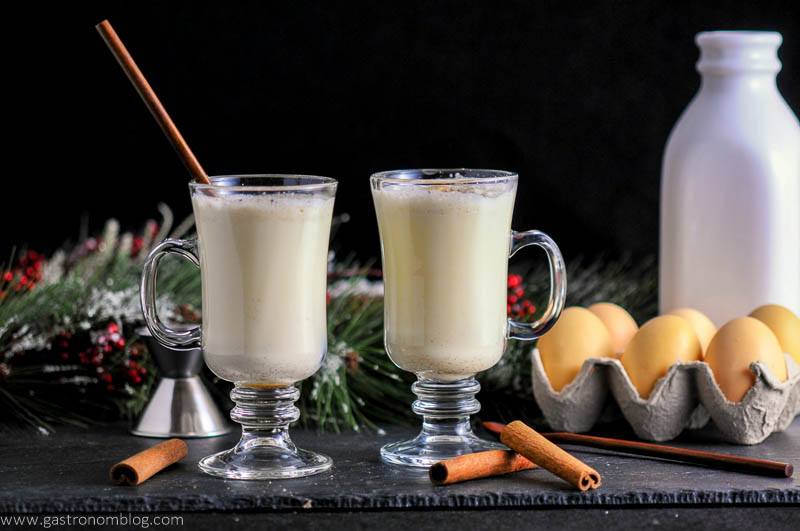 If You Are Looking for More Holiday Recipes, Try These! 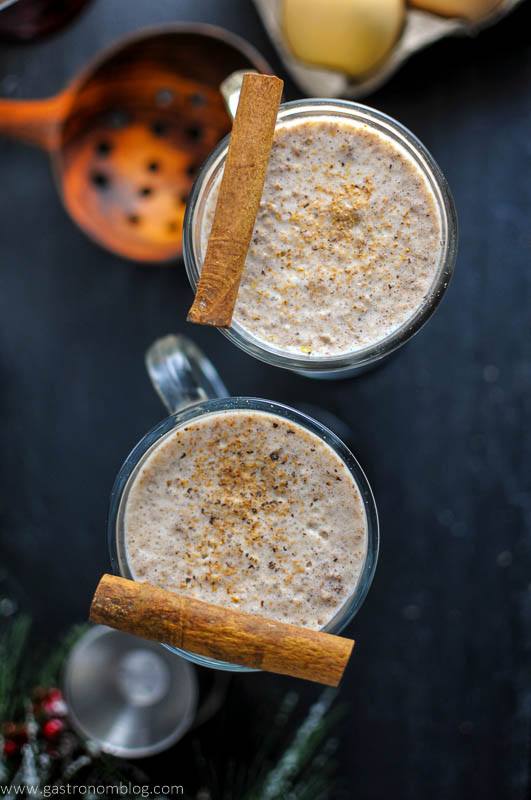 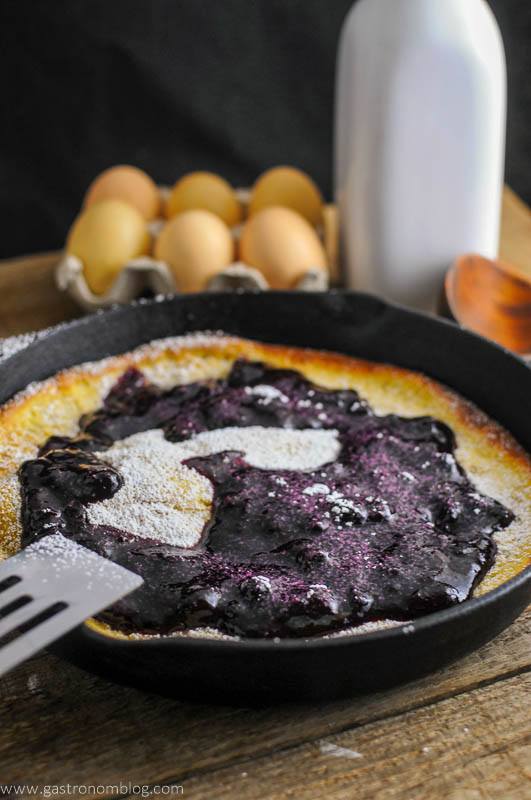 A family favorite, this cocktail is perfect for chilly winter nights, and to be enjoyed with a crowd.

Whip whites in a stand mixer, or with a hand mixer.

When whites are stiffened, add yolk mix to whites and fold to combine. Add in vanilla extract.

We used 1 oz brandy and .50 oz rum, but you can use whatever combination you like the best. Add at least 4 oz hot milk, then top off mug with hot water if desired.

You can add as much milk as you like, more makes it creamier.

Add grated nutmeg on top for a garnish.

PIN THIS TOM AND JERRY COCKTAIL RECIPE FOR LATER! 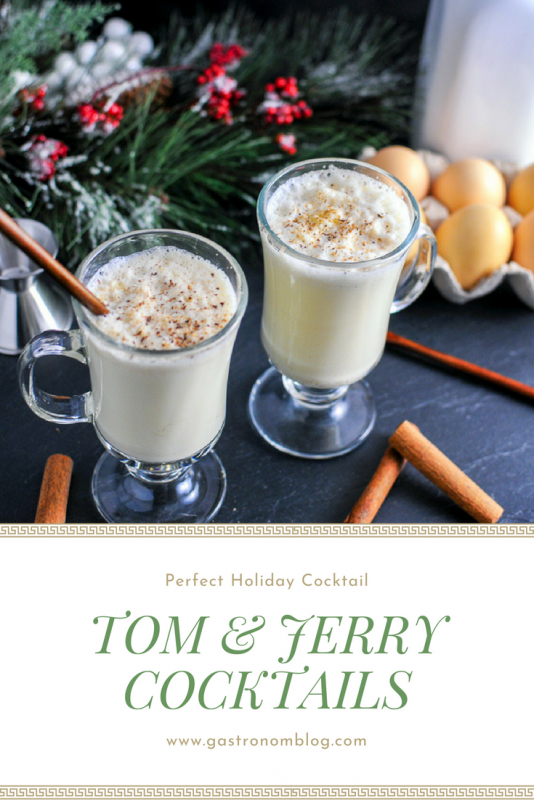 You awesome individuals were too busy writing your entire life story and forgot to say where the vanilla extract goes.

Hey, thanks for pointing it out! We have missed that step on there for 4 years and you are the first to catch it, so thank you! Cheers!

I’m going to make this for a party January 20. Any chance you’ve used cream of tartar to help with separating? Debating whether to use it.

Sorry, I am just now seeing this comment. We didn't use cream of tartar. If it separates a bit, just scoop both sections that separate into the mugs. It will still turn out. Enjoy!

Thank you! We think they are great! Cheers!

What a fun drink! This sounds so perfect for the holiday season!

I bet the nutmeg in this is wonderful! Love the styling of your pics!

Thanks so much! Cheers!