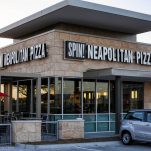 A great pizza place, we hope you try out Spin! Neapolitan Pizza!

Sponsored Post: While we were invited to attend this event for free, all opinions are 100% our own.

We were recently invited to a blogger event at Spin! Neapolitan Pizza in Papillion where we got to meet some other local Omaha bloggers, as well as taste some tasty food! Both of us love Neapolitan style pizza and with Spin’s fame to claim being its take on Neapolitan style pizza, we were excited to have the chance to check them out. After a quick introduction about Spin! and welcome from the manager, we got down to the business of eating. 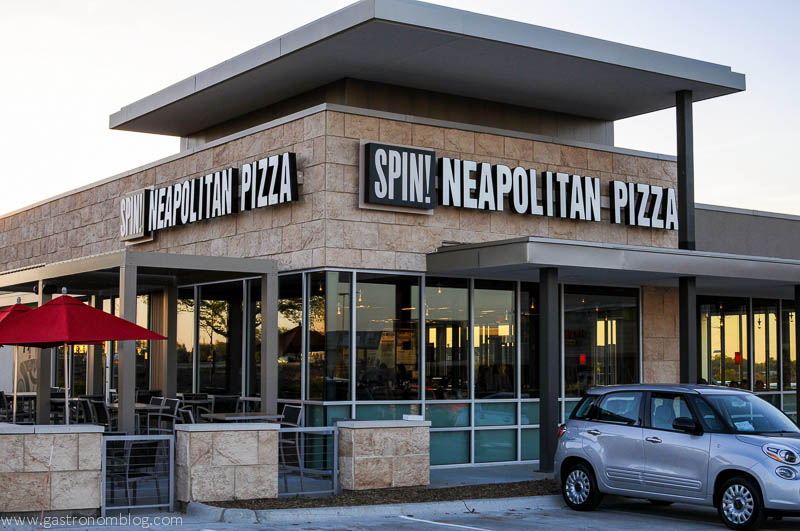 We started off with three of Spin! Neapolitan Pizza’s six salads, the Caesar, Greek and the Sonoma. Spin also was happy to accommodate one of the party who had dietary restrictions and brought out a gluten free version of their Caesar salad. The salads were accompanied by two plates of flatbreads seasoned with garlic and rosemary with a splash of rosemary infused olive oil.

The flatbreads are crispy on the outside while still being airy and tender inside. The splash of rosemary olive oil gave the bread a nice herbal richness. They also brought out a gluten free flatbread, but we didn’t have a chance to taste it. 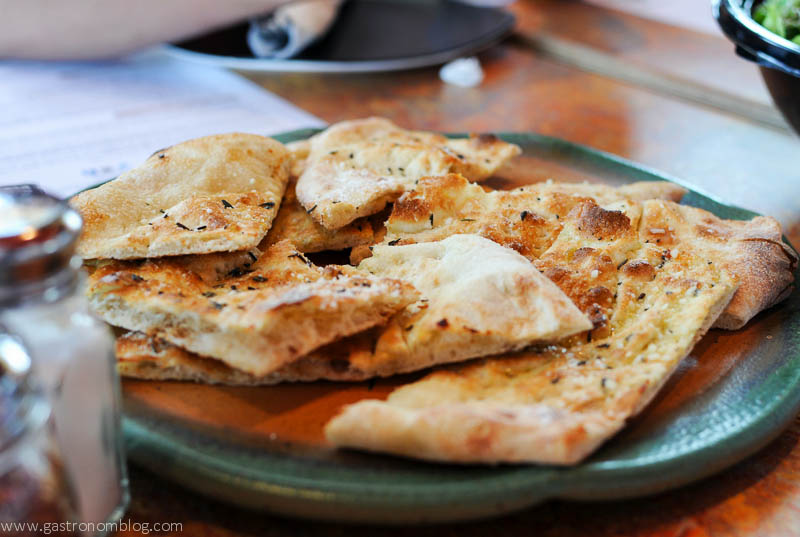 The Caesar salad is made with chopped romaine lettuce, fresh croutons, grana padano (an Italian cheese similar to Parmigiano Reggiano) with a house made Caesar dressing. The salad comes lightly dressed, the grana padano creamy with a salty finish that brings out the rich tangy dressing. 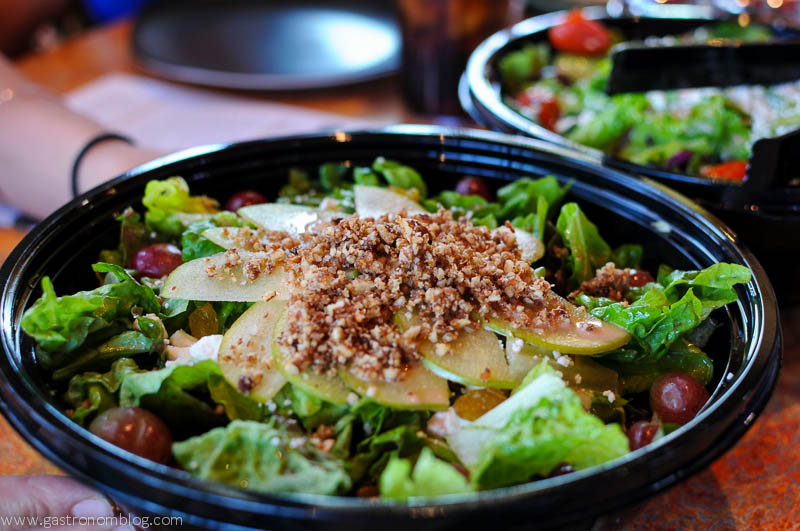 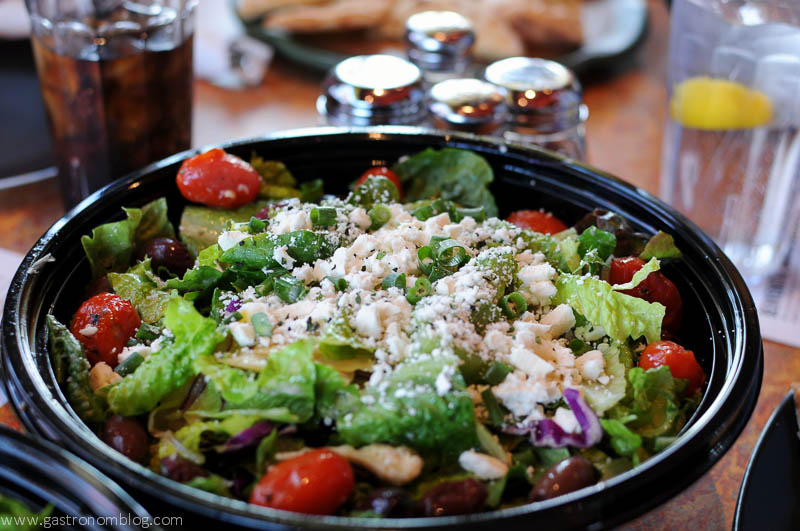 Since Spin! Neapolitan Pizza is a pizza place, the main event for this menu tasting has to be the pizzas. Spin brings some serious culinary chops to their pizza game with the menu developed by James Beard award winning chef Micheal Smith, and the attention to making folks happy is very apparent in the pizzas. Almost everything is fresh and made in-house, except for their meats, cheeses and gelato.

We had a chance to try just seven of their 20+ different specialty pizzas, and had they kept bringing pizzas out, Mr. Nom probably would have happily kept trying them! Spin! features three different crusts, Spin’s original crust, a rustic whole wheat and a gluten free.

As our group had some dietary restrictions, we had a chance to try all three styles and found all to be very good. All of the pizzas are cooked in their spinning stone oven which is kept super hot and cooks the pizza in just three minutes. 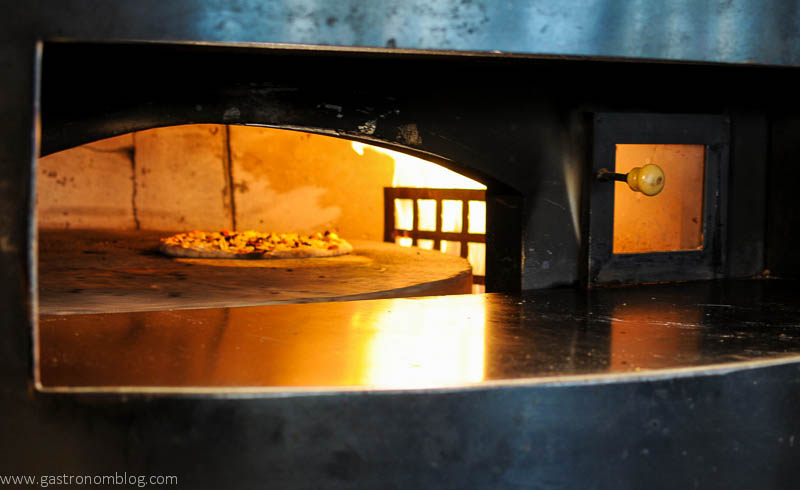 We started with with the Spin! Roasted Margherita, which features the traditional Italian combination of fresh mozzarella, roasted grape tomatoes and basil. This is the original Neapolitan pizza, the colors of the ingredients representing the colors found on the Italian flag while showcasing the crusty and bubbly wood fired crusts and great cheese.  The simplicity of this pizza doesn’t mean it isn’t delicious, and Spin’s version of the Margherita pizza hit all the points of the classic. 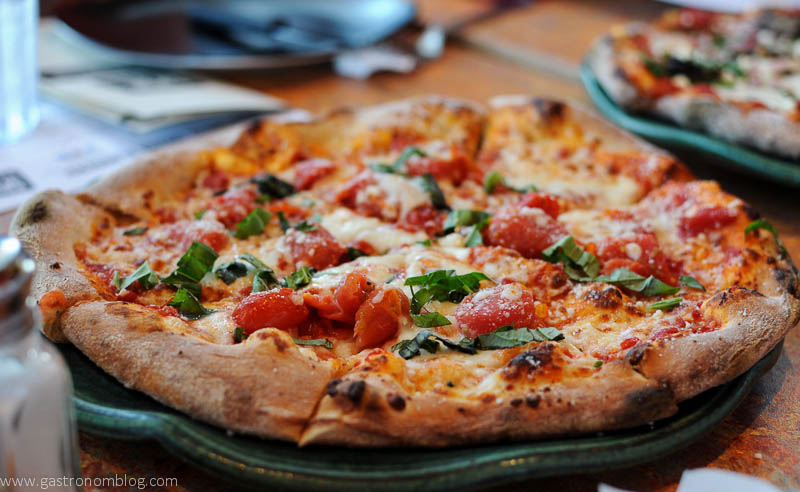 Our next pizza was the Primavera. Topped with fresh mozzarella, red peppers, spinach, red onions and Crimini mushrooms, this pizza was as visually appealing as it was tasty. The onions, muchrooms and red peppers all were nicely roasted to bring out the natural sweetness, which played well with the rich toasted mozzarella. 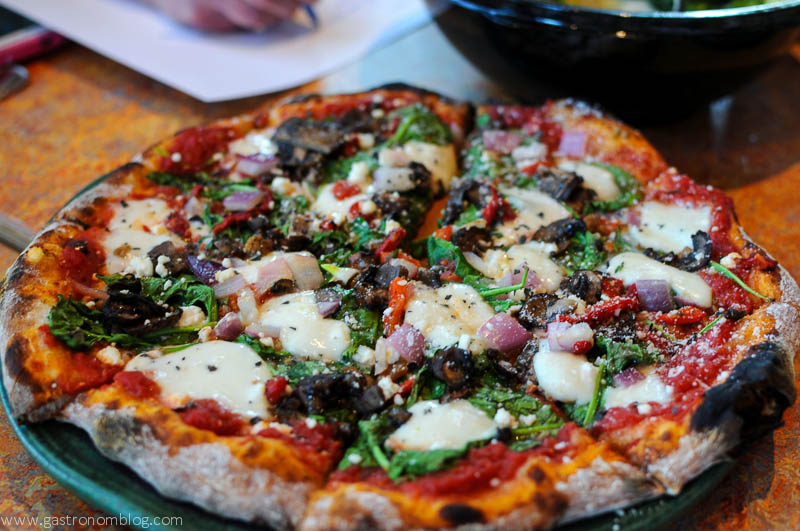 Our third pizza, the Italian Sausage & Apple, is one of Spin’s “white” pizzas, which use a garlic infused olive oil glaze rather than their traditional red sauce of crushed tomatoes. Large chunks of Italian sausage and thin slices of tart Granny Smith apples topped the melted fresh mozzarella. House made glazed pecans gave a hint of sweet crunch that played off the tartness of the apples and the buttery mozzarella.

One member of our party had dietary restrictions and were very interested in the gluten free options that Spin offers. All the staff at Spin! were sure to let us know they were happy to make accommodations if possible and they offer a number of great options already on their menu. They brought out a gluten free version of the Roasted Potato, Pancetta and Goat Cheese.

Thin slices of roasted potatoes, slices of roasted red pepper and scallions top a bed of melted mozzarella and base of the garlic olive oil. The gluten free crust was pretty good, and was a surprisingly good alternative for the original pizza crust for those who want a gluten free option. 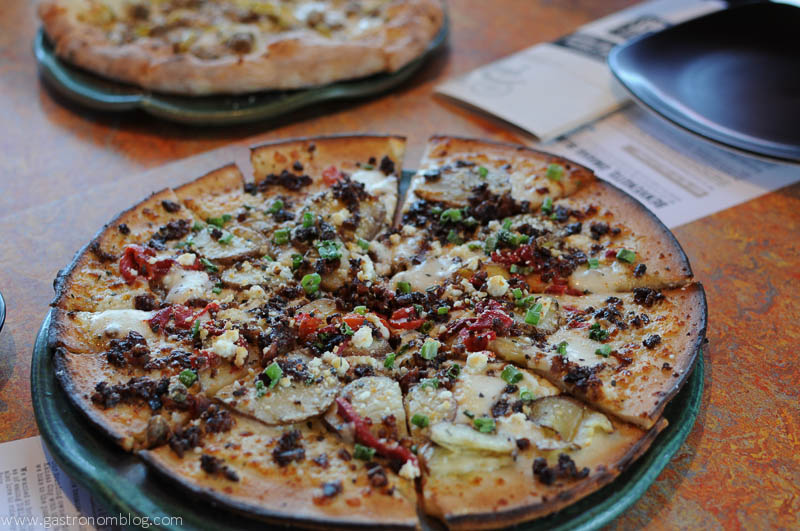 One of the most intriguing pizzas was the The Pollo Arrosto & Chevre (roast chicken and goat cheese). The chicken is house roasted in the pizza oven each morning and had a subtle hint of smoke and char from high heat in the pizza oven. Tangy goat cheese and fresh mozzarella, crimini mushrooms and caramelized onions gave this pizza layers of flavors, with each bit having bits of rich creamy cheese, earthy mushrooms and sweet onions. 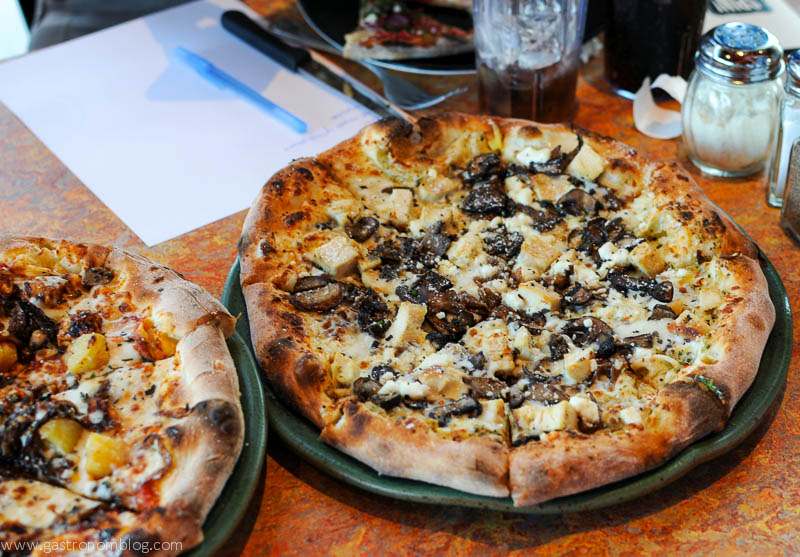 The final 2 pizzas we had were the Greco and the BBQ di Pollo and Pineapple.  The Greco (which also was served with gluten free crust) comes with spinach, Kalamata olives, roasted red peppers and feta on top of red sauce. The Greek flavors all meshed nicely and made for a tasty pie. 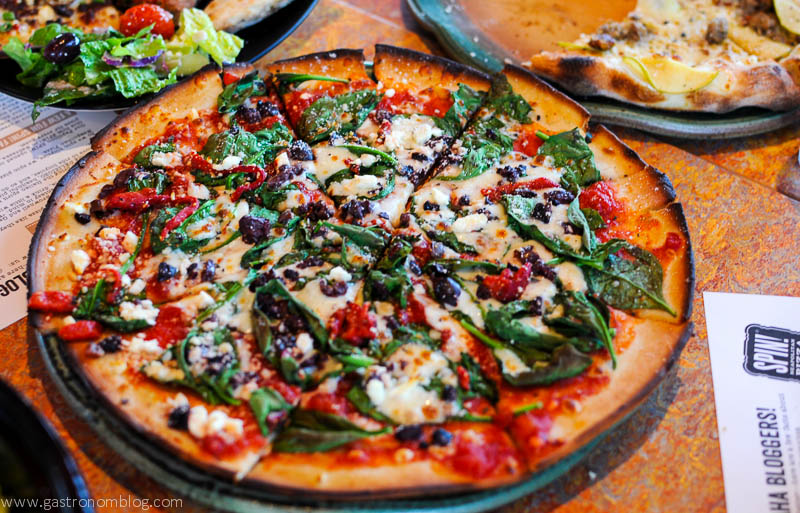 The BBQ di Pollo and Pineapple was Mr. Nom’s favorite pizza, the combination of fresh mozzarella, sweet caramelized onions, and two types of bbq sauce.  Spin partnered up with Kansas City icons, Gates BBQ and Roasterie Coffee Company to come up with two sauces used on this pizza. This pizza was unique in that it had the peppery and smokey Gates BBQ sauce mixed with pizza sauce on the pizza, and while the chicken is covered with a sweet Roasterie Coffee bbq sauce.

The Roasterie sauce had hints of coffee and mocha that picked up the smoked chicken and gave the pizza a delightful perfume of smoked meat.  Sweet and tangy pineapple cut the richness of the mozzarella and heat from the Gates BBQ sauce to make each bite delicious. 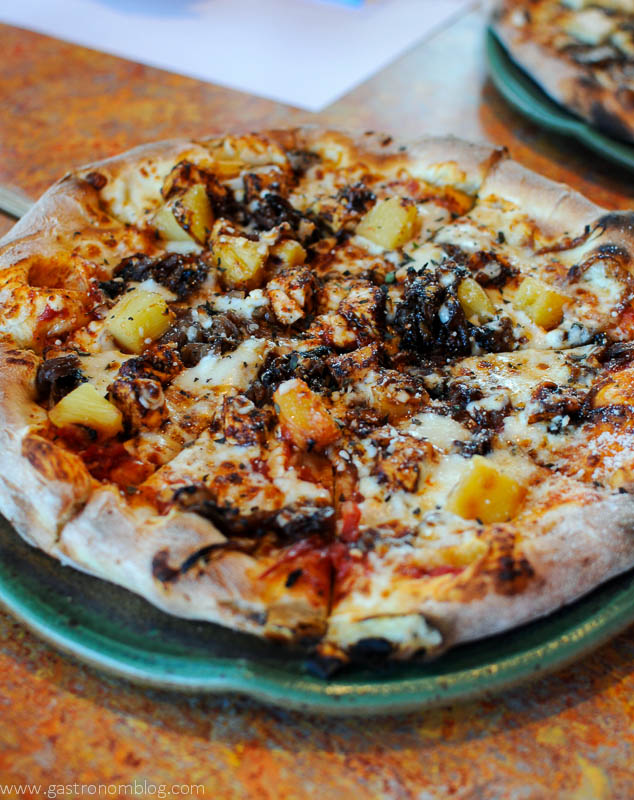 We finished off the meal with a cup of Spin! gelato. A whole menu card of delicious flavors to pick from made it really hard to choose (One of everything please!) We chose the Blueberry Buttercookie and Mackinac Island Fudge. The Blueberry Buttercookie is made with fresh blueberries and chunks of butter cookies and tastes like a sweet creamy blueberry muffin.

The Mackinac Island Fudge is made on Michigan’s Mackinac Island, had a rich vanilla base and chunks of nutty fudge mixed in.  They regularly rotate the gelato flavors so there is always new flavors to go back in and enjoy. 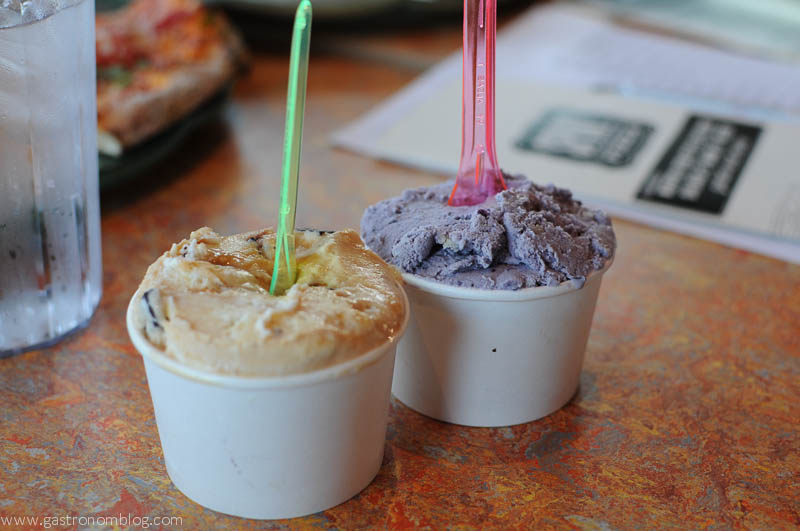 Spin! opened it’s first restaurant in Kansas City in 2005, and they have an interesting take on “wheels.” Their name Spin! is derived from biking in Italy, and their oven cooks the pizza by spinning, and there is a bicycle wheel that spins under the beer taps. The Italians like to bike, so at Spin! they spin bicycles and spin pizzas! Here are their locations, and they are growing!

As we mentioned earlier, Spin! is happy to accommodate  people with allergies or if people are watching their diets. If you aren’t feeling in the mood for pizza, they also offer also soups and sandwiches, so there is a little bit for everyone. They offer a number of drinks perfect for pairing with pizza, offering a number of different wines, sangria, and local craft beers on tap.

Each location of Spin! tries to be heavily involved in their community, and Omaha’s location is prepping for a number of fun local events. They are planning a a wine dinner at the end of May in Papillion, as well as Bike rides and fundraisers throughout the summer. Check out their Facebook page for updates on upcoming events. 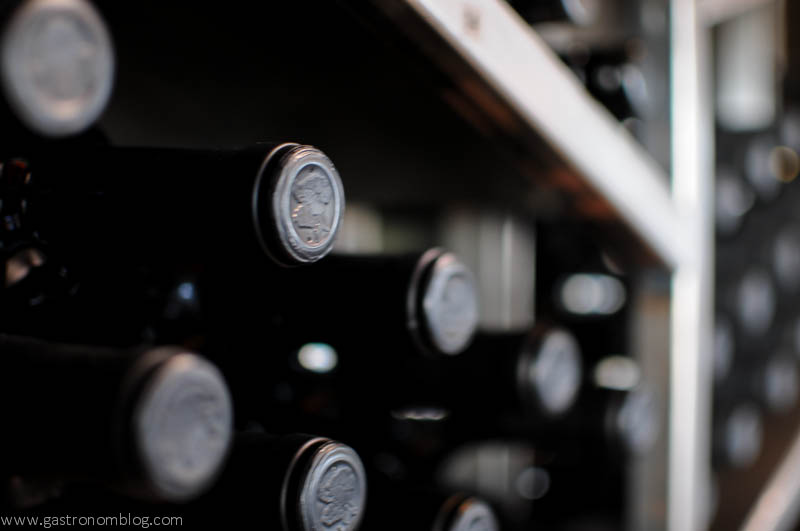 Check out our second trip to Spin! With a Beer and Pizza pairing event! 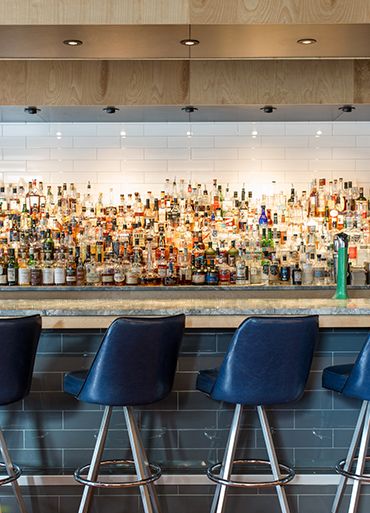 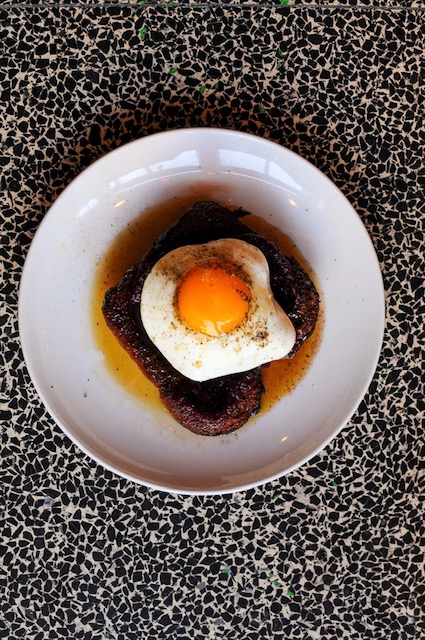 Ive never been but am suddenly craving your sausage apple pizza. ;)

I love trying new pizza! Would love to win so we have an excuse to go up and try it!!

It's so good! Good luck!

i love pineapple on my pizza. all the photos are mouthwatering...i'm starving. love your blog!