Sponsored Post: While we attended this event for free, opinions are 100% our own. 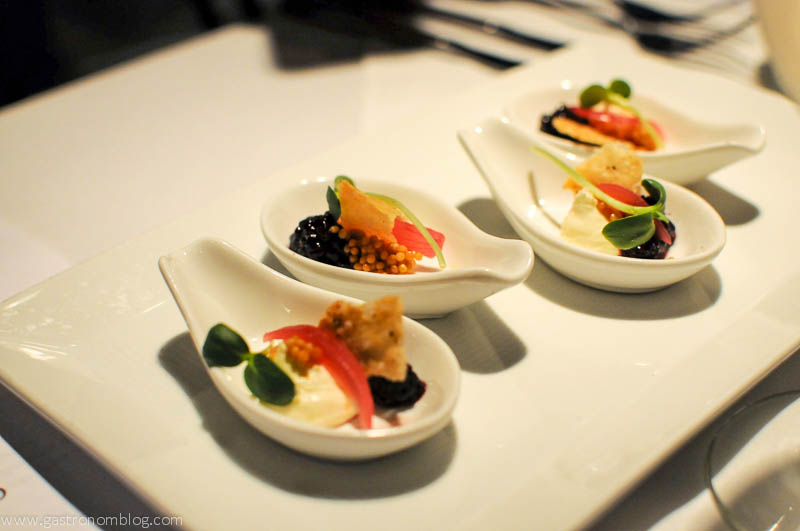 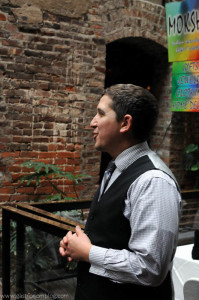 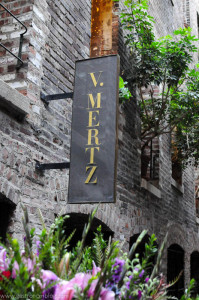 We started off our tour at a classic Omaha culinary institution, V. Mertz, which is located in the Passageway in the Old Market. We were welcomed by Matt Brown, the General Manager and certified sommelier, who ushered us back to a quiet corner where we met the rest of our tour group.  We were given an amazing blueberry, mustard and cream cheese Amuse Bouche to whet our appetite while Matt shared the history of both the Passageway and V.Mertz, which really started the the culinary growth of the Old Market back in the 1970s. 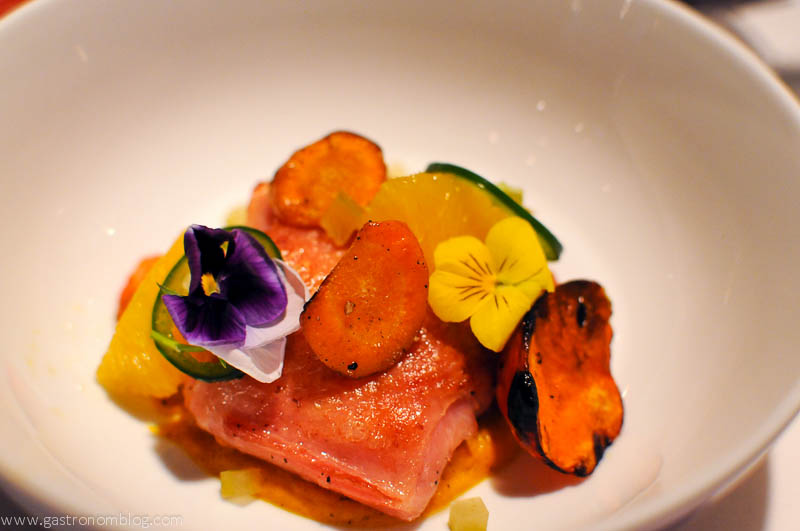 Our first course arrived, a confit chicken thigh on top of a carrot puree with roasted carrots, edible pansy flowers and jalapeno slices. V.Mertz has a proud relationship with their local suppliers, and this course represented this, with a wonderful chicken from Plum Creek Farms and beautiful produce from local farm partners. Skillfully prepared by Chef Kyle Lamb, the chicken was succulent and flavorful, deliciously fatty and rich which helped counter the bold spiciness of the accompanying jalapeno slices.  V.Mertz will be offering a three course meal for $40 per person. An additional wine pairing for the menu will be available for $15. 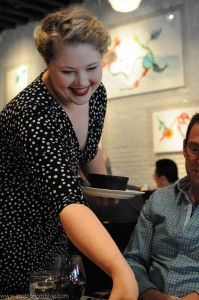 We continued our tour across the street at Le Bouillon, a classic French eatery featuring authentic rustic southwestern French food under the careful tutelage of Chef Paul Kulik. Located in one of the original Old Market warehouses which was saved from destruction by a midnight deal by Sam Mercer, who had a vision of what the Old Market could become. Once the home of the historic French Cafe, Chef Kulik opened up Le Bouillon in 2013 and embracing the history and started restoring the building to its former glory as one of the centerpieces in Omaha’s culinary scene.

We were greeted by General Manager Haley Lindholm and seated in the beautiful airy dining room which features a number of original water colors by Sam Mercer and the beautiful Niki de St. Phalle Tree. After some drink orders, we shared the Cassoulet, a rich rustic stew of beans, sausage and duck topped with a layer of toasted bread crumbs. Served pipping hot in a cast iron pot, the saltiness of the sausage and the duck complimented the tender beans. 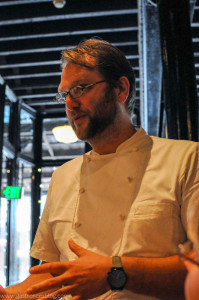 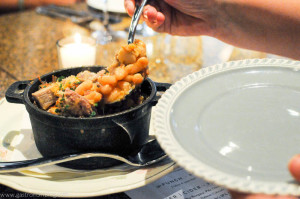 While we were eating, Chef Paul Kulik stopped out to share with us a quick history of Le Boullion and the cassoulet, which was reputed to be the dish that won the 100 Years War against the English and saved the French culture!  For Omaha Restaurant Week Le Boullion will be serving a three course meal for $30 with an additional $15 wine pairing. 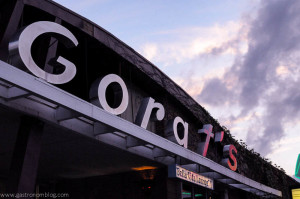 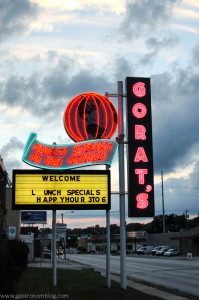 We then boarded a bus, which took us west to 50th and Center to the world famous Gorat’s Steakhouse. One of the original Omaha steakhouses, Gorat’s was founded in 1944 by Louis and Nettie Gorat and operated by the family until 2012 when the restaurant was sold to Gene Dunn, a long time Omaha restaurateur. We were welcomed by Gene, who enthusiastically regaled us with the history of Gorat’s and some of their long time fans, one of which is quite well known all over the world as the Oracle of Omaha!

Gene also talked about some of the changes they have made since acquiring the restaurant, trying to update the menu while staying true to their roots and what made them famous. This was refreshing to hear as this will help Gorat’s stay relevant in a very competitive restaurant scene. 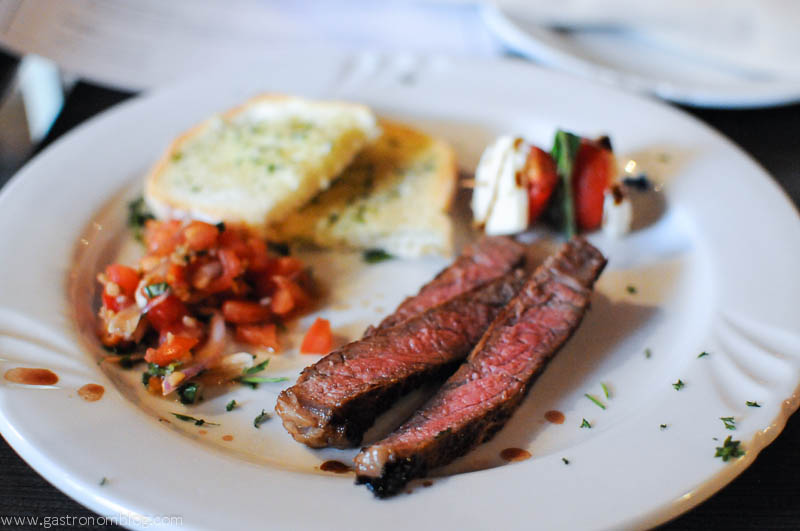 Gorat’s served us a preview of some of their Restaurant Week offerings all combined onto one plate, featuring two of their first course offerings, the bruschetta and Caprese bites and a sampling of one of their famous steak entrees, the whiskey steak. The steak was served a delicious medium rare, well seasoned and fork tender. The bruschetta and caprese bites were very fresh and flavorful, a very classic combination with the steak. Once we were done eating, Gene gave us a tour of the restaurant, showing some of the unique features and some of the areas where Warren Buffet likes to dine. Gorat’s will be serving a 3 course meal for $30.  As a bonus, this course will include a a glass of wine! 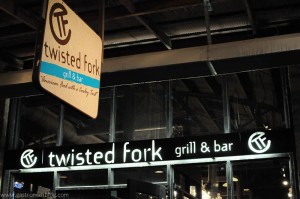 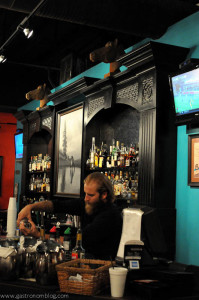 We jumped back on the bus for the ride back to the Old Market to try out our final stop, Twisted Fork. With this being the final stop of our tour, we were served the dessert Twisted Fork will serve for Restaurant Week, a Roasted Apple Crumble Pie. Rich caramel and a chilled roasted apple topped with a toasted crumble topping was a sweet ending to a great tour. Chef Aron Mackevicius strives to present culinary twists on classics, blending classic comfort comfort foods with a modern southern twist. Twisted Fork will be serving a 3 course menu for $30 with an optional wine pairing for $15.

We hope you will take this great opportunity to head out to some of the many restaurants that are participating in Omaha Restaurant Week, or get a hold of the fine folks at Omaha Culinary Tours and get them to take you for a nice guided tour! The tour was a great way to get a look and a taste of a bunch of the great restaurants in Omaha.  Knowledgeable and friendly guides with great connections at each of the restaurants will ensure you get a great tour!  We would like to extend a thanks to Suzie Allen, the co-founder of Omaha Culinary Tours and our guide Kristen Herrera for giving us the chance to tag along on this Restaurant Week Sneak peak!

It was quite good!

Loved the virtual tour! All the dishes looked amazing! So hard to choose what to order :)

Thank you! Yes, it would be hard to pick, that's why it's best to go with a friend and order different things!

I think I want to do this too! Thanks for sharing such amazing food.

It's so much fun! Thanks for stopping by!

what wonderful pics- look like you had an amazing meal!

Thank you, we did!