Holstein’s in Las Vegas is great anytime, but we had a midnight snack!

The night Mr. Nom and I arrived in Las Vegas, we came in on an 830 flight, meaning by the time we got a rental car, checked into the hotel and settled in, we were going to need a very late night meal. With the 2 hour time change, it was very late when we went to eat dinner, 10 PM Vegas time, Midnight our time! Thankfully Vegas is the perfect town to find good food late at night. Make sure you also check out our trip to Joel Robuchon! We decided to go to Holstein’s at the Cosmopolitan Hotel. The Cosmopolitan is a very cool and hip hotel, and Holstein’s keeps up their end of that cool and hip vibe. The atmosphere is hip and trendy with a 50’s diner vibe in the background. Adding a cute twist into the equation are cartoon versions of the Holstein’s cow scattered over the walls.

Leather benches and chairs throughout, wood floors and dividers provide a modern yet warm feeling to the architecture. Our only complaints were that it was a little loud for conversations (the music was thumping) and the tables seemed a little high for the bench seats. When we were greeted, we were given the option to sit in the bar or in the dining room. We opted for the dining room, rather than the very loud and busy bar, and were escorted back to a corner table with a bench seat.  We were promptly greeted by Sheena, who enthusiastically explained the menu, recommending a few options that she mentioned were her favorites.

One of the menu highlights she mentioned was the alcohol infused shakes. Seeing as we were in Vegas to have some fun, we ordered their Bam-boozled shakes, which have a decidedly adult flavor as they all are made using alcohol.

Mrs. Nom ordered the Drunken Monkey which was Reese’s pieces, banana and Frangelico. Mr. Nom ordered the Campfire Smores which contained Smirnoff Marshmallow vodka, homemade marshmallows and a graham cracker crumble. Both were very thick and came with an extra tin filled with the shake.

They were very sweet and tasty, with the liquor taste just barely there in the background.  If the shakes weren’t so rich and filling, you could totally drink these all day and enjoy the buzz! I know the shakes also attract a lot of attention and probably almost sell themselves as one of the ladies at the table next to us was lustfully eying the shakes… We proceeded to order the Buttermilk Onion Rings with Chipotle Ranch, and 2 types of sliders, as the full size burgers looked pretty massive. Ironically at a place named for a type of cow, Mr. Nom and I chose to order seafood dishes, selecting the Maine Lobster Roll and the Ahi Tuna Sliders.

While waiting for our food, we received a small polished metal bucket of Salt and Vinegar popcorn to munch on. Overall, it just tasted like buttered microwave popcorn, with not much vinegar taste at all, although Mr. Nom claims he found a bit of vinegar more towards the bottom of the bucket. Disappointing, because that sounded like such a wonderful taste treat! Our onion rings came out first, and were very crispy and had a dusting of sea salt over the top. The platter of rings comes artfully arranged in a brick wall pattern (see the picture.) The rings were thick cut, nearly half an inch thick, with a crisp batter coating. The batter is nicely seasoned, with a slight tang from the buttermilk used in the batter. The Chipotle Ranch dipping sauce had a great smoky, creamy flavor.  The amount of spiciness cut the sweetness from the onions and really went well with the crunchy rings. The sliders arrived, and looked so very cute! The Maine Lobster Rolls were served as a pair, come on toasted and buttered mini split bun with diamond grill marks.  The lobster salad, overflowing the bun was very creamy and cool with the warm bread. We decided the flavors were great, but the balance between roll and lobster needed to be worked on, as it was a bit hard to eat gracefully.   The rolls sere served with a side of side of coleslaw, was pretty unremarkable, but really compared to the rolls was just an afterthought.

The Ahi Sliders were on cute mini hamburger buns with wooden sandwich picks, three to a platter. The tuna was sushi like, flash seared to put a slight seasoned crust on the outside, while the center was still cool and fresh.  Topping the tuna was fresh avocado and chili mayo. Cool crisp marinated cucumber countered the heat from the chili mayo, bringing good balance to the flavors.    The creamy avocado was a perfect finish to a slider that tasted a lot like a great sushi roll. Make sure if you are in Las Vegas, to check out Holstein’s, we also recommend staying at a VRBO rental location!

One of the best meals we have ever had, this was an amazing dining experience in Las Vegas at e by Jose Andres!

Holstein's in Las Vegas is great anytime, but we had a midnight snack!

Our visit to Bobby's Burger Palace in Las Vegas!

A Las Vegas classic, Joël Robuchon is a treat and an amazing experience if you are foodies like us! Enjoy! 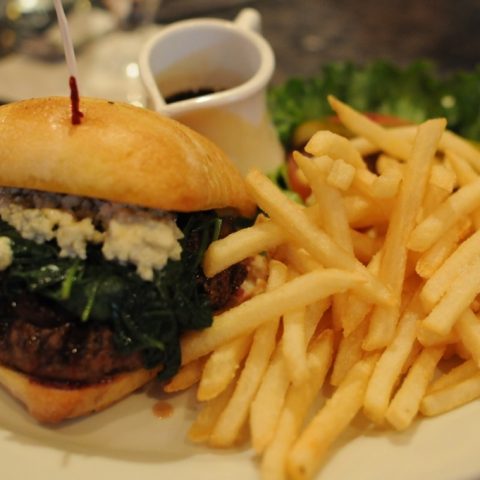 All about a fantastic meal at Burger Bar in Mandalay Casino, Las Vegas!